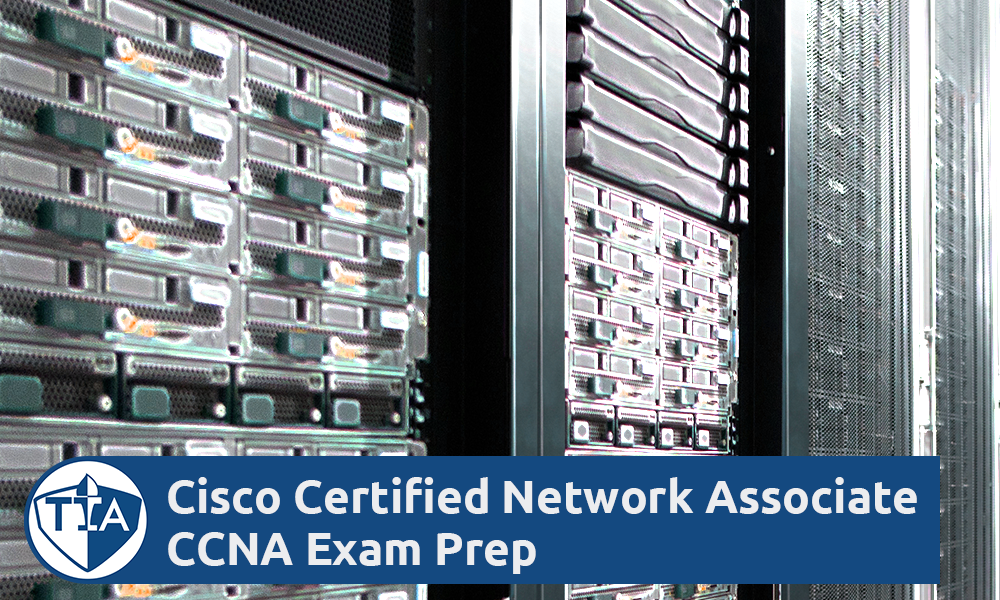 The CCNA Implementing and Administering Cisco Solutions certification is one of the most popular certifications in the networking industry. The CCNA exam certifies your knowledge and skills related to network fundamentals, network access, IP connectivity, IP services, security fundamentals, and automation and programmability.

The Implementing and Administering Cisco Solutions (CCNA) course gives you a wide range of fundamental knowledge for all IT careers. Through a combination of lecture, hands-on labs, and self-study, you will learn how to install, operate, configure, and verify basic IPv4 and IPv6 networks. The course covers configuring network components such as switches, routers, and wireless LAN controllers; managing network devices; and identifying basic security threats. The course also gives you a foundation in network programmability, automation, and software-defined networking.

This course helps you prepare to take the 200-301 Cisco® Certified Network Associate (CCNA®) exam. By passing this one exam, you will earn your CCNA certification.

This course is not a beginner level networking class. Students should have a basic background in networking which can include work experience or other certifications such as CompTIA Network+. If you are new to the world of networking, we recommend starting with our CompTIA A+ and Network+ courses.

Unlimited Retakes for One Year

You can retake the course as many times as needed completely free.

If you cannot pass the CCNA exam after 2 retakes we will refund the full course tuition. Must take the exams within 6 months from your first class completion

We will pay for your second attempt at the CCNA exam if you cannot pass on your first try ($300 Value) after our class. Exam must be taken within 60 days of the course end date.

The course will also include our customized and proprietary CCNA course presentation/study guide and custom practice labs.

If you are not happy with our instructor or training environment, let us know on the first day of class and we will issue a full refund of the course tuition.

Our CCNA certified and licensed instructors will ensure students only get the best in training. Our instructors have taught thousands of classes in the last 15 years.

ALL times are EST. Online courses are delivered from our location in Virginia.

If your group is unable to attend a class with us due to traveling or scheduling issues, we can come to you. We can conduct this course at your location based on your schedule. We also offer great discounts if you purchase multiple seats for our classes.

As a CompTIA authorize partner, you are sure to receive the highest quality instructors, authorize courseware, and a great classroom environment.

What does the CCNA certification training course include?

See How we Compare

Will this course prepare me to pass the new CCNA exam?

Yes, our course will thoroughly prepare you to pass the new exam. The knowledge required to pass the updated exam is covered throughout the class.

Why is the tuition much lower than other schools?

Our tuition is much lower than other training providers because we have optimized our business processes to ensure quality training at a reasonable price. As a smaller school with lower overhead we are able to provide a great class and better value to our students.

We only hire the best instructors. Our instructors for CCNA must have a minimum of 10 years of real world experience and at least 5 years of teaching experience.

Does my experience qualify for the exam?

There are no prerequisites for the CCNA exam but we do request you have basic computer and networking knowledge before you attend this course.

Why should I choose your training over other CCNA training providers?

Choosing a training provider can be tough choice. We all claim to offer the best value, in terms of price, passing rates, and guarantee. The Technical Institute of America offers the lowest price, one of the best passing rate, and an excellent guarantee. As a New York State licensed school and Better Business Bureau Accredited business we can honestly say what we offer is the truth and you can verify it.

Do you ever cancel a class because you don’t have enough students?

No, we never cancel a class. We will teach a class with 1 registered student if we have to. If unforeseen circumstances arise such as bad weather, instructor health or family problems and we have to cancel a class, we will offer all students a 100% refund or reschedule to another class.

I might miss one or more classes, can I make it up?

Yes we offer the most flexible schedule of all training centers. If you miss one or more of your classes you can attend a weekend, evening, or weekday class to make up your class. E.g. if you miss a Saturday class, attend the following week evening course to make it up.

Understand the model of host-to-host communication

Describe LANs and the role of switches within LANs

Install a switch and perform the initial configuration

Describe the operation, benefits, and limitations of static routing

Describe the application and configuration of inter-VLAN routing

Describe the management of Cisco devices

Implement a basic security configuration of the device management plane

Combine multiple courses and save on your tuition.

Online courses are delivered from our location in Virginia.

"Great class! I was able to pass the CCNA exam very easily. The labs were fun and challenging. I recommend this course to anyone looking to pass their CCNA."

"Instructor was very clear and concise. He explained the topics in an easy to understand manner. The labs were fun and made passing the real CCNA exam easy."

"Having the right instructor makes all the difference, when trying to learn complex topics. I tried self-studying but it was hard making time and understanding the topics by myself. Our instructor was able to make the material very easy and fun to learn. His method of not using the book, but explaining while we were doing the lab made the class enjoyable."

"I just passed my CCNA exam. The class helped me understand the concepts and how to apply them. Andrew was a fun instructor. His unique approach to teaching was great."